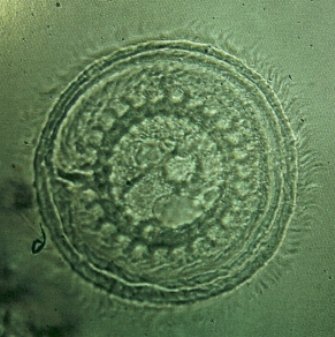 This saucer-shaped parasite is over-rated in its pathogenicity (not a big fish killer by itself but sure does cause self injury.) although I have seen it cause spider web lesions in the skins of Koi. The most serious damage it may do is to the gills of smaller fishes. This is one of two or three parasites that causes scratching in Koi, with few serious side effects. The most important thing about Trichodina, is that when it is discovered, it belies a problem in the System Housekeeping department.

You can bet your license that there is some accumulation somewhere of mulm, and lots of it. TRICHODINA clears easily with SALT, and in very short order. You need only leave salt in for a few days to clear Tricho for good.

Trichodina is a common pathogen of Koi, goldfish and pond fish. This is a unique pathogen in several ways. First, Trichodina is problematic in tanks that are rich in organic debris and detritus. In some instances, researchers have found that by maintaining fish in very clean tanks, Trichodina was self-limiting. Trichodina is also unique in its ability to remain pathogenic at very low temperatures. An example of such temperatures would be Koi, goldfish and pond fish pond conditions in the mid-thirties [oF]. While an inexperienced clinician might dismiss the possibility that the symptoms are related to a parasite in such cold water, a more cautious one might utilize the microscope and verify the presence of this common pond pathogen.

Trichodina’s other ‘special ability’ is its occasional resistance to salt at 0.3%. Indeed, there are few cases wherein salt does not clear up this parasite, but when this occurs, it can be serious. In most instances of salt resistance, double and triple salt levels clear the pathogen. You should be aware that otherwise healthy fish will survive salt levels up to 0.9% [zero-point-nine percent] which is achieved with three tablespoons of salt per gallon. See the formulary for information on this technology.

The clinical appearance of fish under attack by Trichodina is primarily epidermal. The fishes’ skin will appear irritated. The Koi, goldfish and pond fish will “flash” and scratch conspicuously. Eventually, the damage to the integument [skin] may eventually result in sores or ulcers. It is important from a practical standpoint to note that Trichodina is not the only organism that causes flashing. Inexperienced pundits have sometimes asserted this.

Ambitious hobbyists may collect a surface biopsy from the skin of affected fish and view it under the microscope. Trichodina appears as a flat, saucer-shaped organism. It is easily seen at relatively low magnification. I typically make my observations of this organism at a combined power of 100-200X. On closer examination under the microscope, the organism is fringed on the outside margin by thousands of tiny cilia or hairs. Inside the saucer, there are varying numbers of teeth or ‘denticles’. The actual numbers of rings and denticles determines which of the many sub species of Trichodina is being examined. Honestly, I have never been able to determine the clinical relevance of determining the subspecies of Trichodina. They all die the same.

Below, a video download of Trichodina in motion under the microscope.