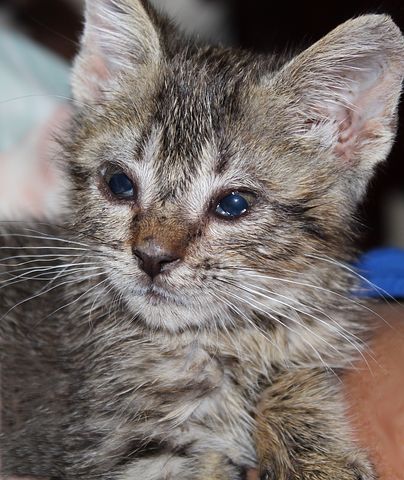 Often, the best combination of treatments I have found for Snuffles is short or long acting cortisone, Cypraheptadine, and Clavamox. The main thing is to keep the cats eating, because when their sinuses don’t allow air passage, their appetite fails for lack of smell. Worse, breaking a fever may become critical. Cats will not eat when feverish. Many respiratory cases improve ‘faster’ with Lyseine as a dietary supplement. It’s not a cure but it will head off the severity and duration of ‘colds’.

The most common manifestation of “Feline respiratory disease” is an infection of the upper respiratory tract (nasal cavity, sinuses, and upper airways). Involvement of the lungs (pneumonia) is much less common but represents a more serious infection.

The most common signs of Feline Viral Respiratory Disease are mild to severe sneezing accompanied by a nasal discharge, discharge and redness of the eyes, and occasionally coughing. Other signs include: Lack of appetite (due to blocked nasal passages inhibiting the sense of smell), depression, and fever. Occasionally, this disease can progress to pneumonia, dehydration, and even death.

All discharges (oral, nasal, and ocular) are infective. Contaminated feeding bowls and bedding are capable of transmitting the disease from infected cats to susceptible individuals. HUMAN “COLD” VIRUSES ARE NOT TRANSMISSIBLE TO CATS AND VICE VERSA. Often humans and cats get “colds” at the same time of year, which causes us to wonder if transmission has occurred. Humans can, however, transmit the disease from one cat to another if they are contaminated with infected discharges so it is best to wash your hands after treating your pet.

Treatment usually involves broad spectrum antibiotics to prevent or treat secondary bacterial infections, nasal decongestants, and occasionally, vitamins. For more severe cases, hospitalization may be indicated. The duration of the disease depends on the individual health of the infected cat (ie. concurrent malnutrition, stress, parasitisms, and other infections that may contribute to a more severe infection), the strength or virulence of the virus, and vaccination status of the infected cat.

Humidity is VERY soothing to cats with FVR signs.

However, vaccinated kittens and adult cats can still occasionally become infected but usually their disease is much less severe.